Banknote of the Week 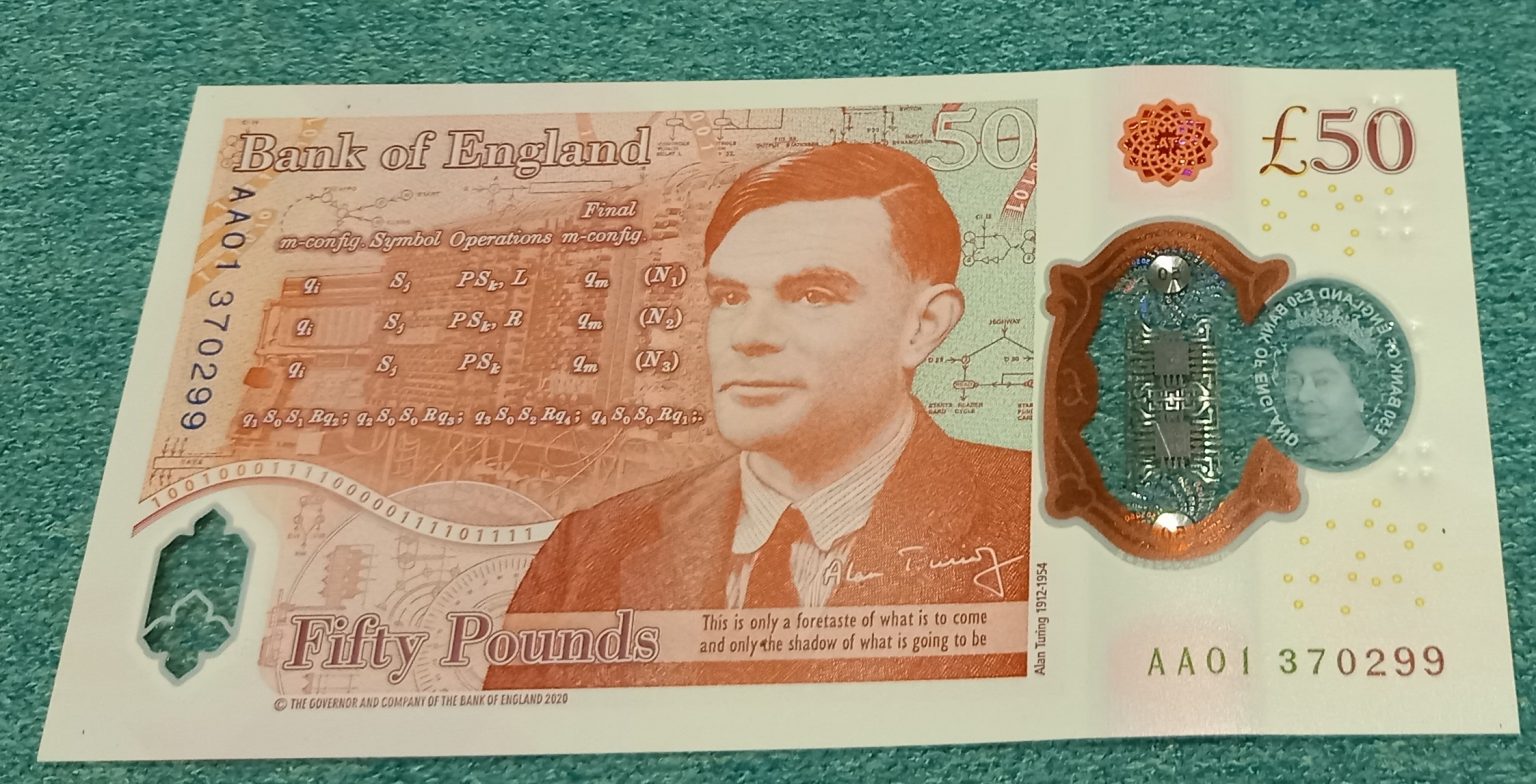 The new £50 polymer note acknowledges the great work done by Alan Turing and his colleagues during WW2. It also recognises the injustice he experienced which contributed to his ending his life at a young age. Banknotes not only are currency and commercial value, but they also highlight the work and times of people such as Florence Nightingale, Edward Elgar and Adam Smith, to name but a few. Collecting banknotes is a great interest but it is also a collection of social history . This First Run banknote is listed along with several others at a price some way below what was paid recently at auction. I offer free UK postage so ithere are no hidden fees or costs added on to a selling price. Have a browse at what is listed and keep eyes peeled for more additions in the days ahead. There is a good vaireity on offer for the Scottish and English collector. Do contact me if you want to discuss anything about notes you may have. Even if it is a single note you have found I will always do my best to advise. Every person who phones me or makes contact by email will receive the same service. It is always a pleasure to help and advise. The website has a great selection of notes and there are some great banknotes on the way as well, so keep looking at the 'Recently Added' on the Home Page.

British banknotes, paper money, has a long history dating back to 1695, the year after the founding of the Bank of England. Over the centuries, banknotes have developed in face value even though for most people until 1914, banknotes were rarely seen or used.

It was after the outbreak of WW1 banknotes were produced with lower values, 10/- and £1. These are ‘Treasury Notes’, signed by the Chief Cashier of the Bank of England, John Bradbury. ‘Bradburys’ and ‘Warren Fisher’ notes are very collectible. Some notes are rare and of great value. Collectors of British banknotes are attracted by their design, rarity, currency history and can be seen also as an investment.

For most, it is an interest, focussing upon a particular area such as Treasury Notes, White Banknotes, Replacement Notes, Experimental Notes, Errors, Low serial numbers, Debdens, First and Last runs. Amongst the British and World banknotes on offer here, I hope you will find banknotes to enhance your collection. Have a look also at the Provincial Notes on offer.

Grading of Banknotes – Being Pedantic and Precise

I won notes at recent Banknote AUctions. Most were graded correctly but three Lots were graded poorly. The worst was a AUNC being VF at best. How this slipped through I do not know. I try hard to be precise in my grading so that buyers can be confident that a note is exactly as… Read more »

From June 5th until June 11th no emails will be answered and no banknote sales processed.