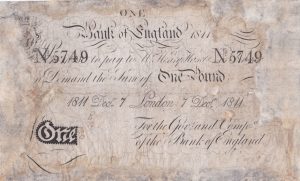 This is my earliest banknote from 1811. It is a B201b Henry Hase £1 white Bank of England banknote and although not in the best condition, it is rare and very collectible.Henry Hase was the Bank of England cashier from 1807-1829. He was the ‘reluctant cashier’ as the previous cashier had been jailed for the embezzlement of around half a million pounds. What would this be in today’s money?

Hase notes are not necessarily signed by him. Clerks could do this at the time unlike the later white £5 notes so the name of the chief cashier need not be found on the early British banknotes. There are no known Branch notes in the hands of collectors.

Forgeries can be found for sale and these contemporary notes fetch high prices at auction. However, this is a genuine note, a lovely example from the early banking history of England.

None of his notes are inexpensive. This B201b is a great note for any British Banknote collector. There are collectors who specialise only in the white fivers (£5) and this one would grace any banknote collection.

From June 5th until June 11th no emails will be answered and no banknote sales processed.