Banknotes and social change go hand in hand. An example is Tibetan currency. Bank notes were introduced into Tibet in 1913. Prior to this, coins were the currency (and bartering) dating back to the 1600s. The banknotes – Tam – were printed with a clear red seal of the Dalai Lama and the black seal which was a government recognition of the legitimacy of the currency.  The denominations were changed to ‘Srang’ and the notes were printed on locally produced paper with ink imported from India. The 100 Srang note illustrated is a really good example of the quality of the printing. The notes were in circulation until 1959 until the Chinese imposed the Renminbi which was in circulation over China. The 100 Srang note is a remindedr of days past as well as the status of the Dalai Lama in Tibetan culture. This is a lovely note for any collection. The history of banknotes is truly amazing. 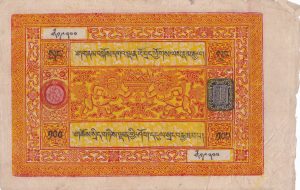